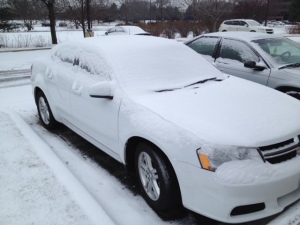 Well in Denver earlier this week I was out and about with just a suite jacket…it was close to 60 degrees during the day.  That was the first half of my week.  On to Chicago, and it’s definitely winter (as you can see from my snowy car picture).

Today I’ll be working with a company on their security business strategy – their go-to-market plan to grow security sales in 2013.  Hopefully you have one of these…if not, it’s not too late.  But don’t go into February without one.

This morning’s Wall Street Journal answers the question on how relevant this business direction is: “Security is moving from a functional IT area, often below the paygrade of CIOs, to strategic importance at the highest levels of corporations.  IT security’s rise from being a functional area to a board level concern is maybe the fastest I’ve ever seen,”  say’s Thomas Sanzone, senior vice president of consulting firm Booz Allen Hamilton Inc…so is this a smart direction?  Yes!

I had the privilege of sharing the stage with Bob Bragdon of CSO magazine earlier this week (in Denver), and he shared with us that only about half of Fortune 2000 executives belief they are well equipped in their security strategy. He then showed us a study CSO conducted, showing that really, only about 8% of them actually have something in place – the rest are in big trouble.  In an article I referenced last week, Wall Street reported on security, quoting  cybersecurity experts who believe that every major company in the US has been infiltrated by hackers – the new wave of threats, according to Bragdon, is more focused on stealing intellectual capital than credit card fraud.  Other countries are slowly shifting us of our innovation and intellectual capital.  There is no one single incident big enough to lead us into a war, but if we don’t do something soon, we’ll find ourselves completely exposed and crushed in a market of copycats and cheap overseas products.  This is not good.  (Worse, they are in our DoD systems!)

In a recent meeting with the former CIO of a large Florida university system, who also served in the military working with intelligence, I was told  that, “Our country is behind in the area of cyberwarfare.”  Other countries are attacking – note the recent attacks on major banks in this country, yet we are unable to prove who is responsible.  “It’s no longer a 2-dimensional war” he said, “That’s all our military leadership really understands…”

So is security still relevant?  It’s probably more relevant today than it was 10 years ago when organized crime began raiding databases to steal credit card information.

One thought on “Is Security Still a Good Business to Pursue?”