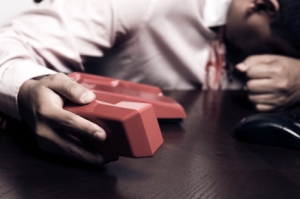 I’ve written numerous posts on negotiating, and as I continue to study this area, it gets better all the time.  Over and over I have encouraged people to practice!  Use every customer satisfaction issue as an opportunity to work through difficult situations! Become an expert at staying cool, controlling the situation, and methodically moving through the process.

Yesterday I experienced another victory – I received a call several weeks ago from a telemarketer asking me to switch from Windstream to Time Warner Cable for phone and Internet.  The cost was about half of what I was paying (I think I actually wrote about this sale a few weeks ago – the agent did a great job selling me), so I bought it!  Well this was the week to cut over.  I am now running my office on digital cable phone for half the price…however, vmail was not included.  The sales agent assured me it was, but alas it is not.

So yesterday I decided to see how high I would need to go to have free vmail.  I started with the call center who predictably could not give me free vmail.  Agreeing that this would be impossible, I asked to speak to the supervisor – Wyatt soon joined me, and we reviewed the situation.  He was sure is could not be done, so I simply restated, “You are not able to do this”.  He agreed, and I asked for his manager John.  John was very helpful, however he was not able to do it either.  However, John truly did want to help me, and began reviewing some options.  Finally he came back and asked me to visit the local store.  Well, who has time to drive to a store in the middle of a work week?  So I asked for the store phone number instead, which he gave me.  From there I called the store, asking for the supervisor.

The person who answered the phone insisted on helping me before getting a supervisor involved, however, he also could not help me once I explained my dilemma.  Finally, I was escalated to the store manager Brett.  Within a few minutes Brett was checking to see what he might offer me.  I recommended a half year of free vmail, to which he agreed, and then proceeded to add it.  Perhaps I could have pushed for more, but I was happy with the response.  Time Warner Gets an A+ for customer service on this one (although I would recommend empowering some power down the line to shorten this up a bit).  Once again, it pays to work through the process rather than getting upset or giving up.  Give it  a try.