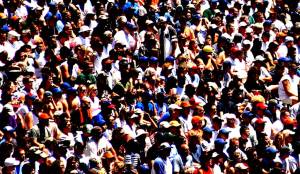 A few years ago, I was scheduled to speak in Chicago at an executive breakfast.  I flew all night from southern California to make this event, almost got stuck in Philadelphia  (I was re-routed) due to storms (which would have caused me to miss the event), but finally made it in at 3 AM that morning.  When on the ground I learned that they had lost my luggage.  I finally made it to my hotel by 4 AM, checked in, took at three-hour nap, and arrived at the breakfast.  The room was full, however I had not been able to get the attention of the sales manager in weeks and had no idea who I was speaking to.  Remember, the speaker must be able to connect with the audience, which requires some understanding of who I am speaking to.
Through some questions, and a raising of hands I learned that I did not have an executive audience at all.  These were IT managers.  They seemed to appreciate my insights, however at the end of the meeting we had planned to sign people up for risk assessments.  Generally we get about 75% of the group to sign up, but in this case almost no one signed up.  This is typical for a technical audience;  they have no liability, therefore they have no urgency.  When technical people do agree to an assessment, it is usually because they want to learn – they are looking for security experience to add to their resume.  Follow up calls were made, but in the end the results were poor.  Why?  Wrong audience.

There are four types of people you want at your next marketing event:

Decision Makers. This is obvious; you want people who can spend money.  Depending on the market you call on, this could be anyone from the president of an SMB company to a vice president in a fortune 1000.  CIOs are also great candidates in most mid to upper accounts, but in the SMB space you just need the president or owner.

Asset Owners.  Presidents are asset owners, but not the only ones.  Asset Owner simply means someone who has ownership and responsibility over key business assets – in this case, data.  These people oversee and make money with assets.  And while most decision makers are asset owners, there are many more who fall into this category.  Anyone who oversees a profit center would fall into this group in most cases. Especially if their division or group is a profitable one. A great example would be the manager over Investment Banking or Card Services at a bank.  If these people see a need and push for it, they often get it.

Customers.   I always start my invite process with customers in good standing.  Having a bunch of prospects sitting with the CEO or President of a company that really likes you never hurts.  It also helps to use their name when inviting new people.

Prospects.  This may be obvious but I am amazed at how many demand generation events are customer only!  This is the perfect time to reach out to new people, especially those at a higher level.  Every sales person knows how difficult it is to land a meeting with a new executive level prospect, but how much easier to invite them to a well organized event with a speaker that promises to be good.

What about technical people?  Most executives don’t want to attend something that is technical, however, expect a few to sneak in, and if you have some customers that are big buyers, and your primary contacts are technical, it doesn’t hurt to invite them.  I would not invite technical prospects to this event.  They will only try to derail the meeting with technical questions, and will not benefit from anything presented on the business level.  It’s a wasted seat in my opinion.

The great ending to my Chicago event was that after the meeting, I headed back to the Airport (without my still-lost-luggage), only to find that all flights were cancelled.  I made a trip down to luggage and there was my suitcase. No one had called me; it was just sitting there in the corner.  I grabbed it and headed back to the Marriott.